Installing house windows in your kit home has to be the easiest part of the kit assembly process. "Prefab frames" have the window sills, trimmers and lintels precisely set up for your specified windows to slot in and nail home.

With pre-fitted reveals and great instructions on how to install house windows, you can have each one setup and secure in half an hour. Specifying aluminium (sash) windows in your inclusions is the best way for you, the novice kit home builder to do the job yourself, although there are many other types, if you are adventurous. 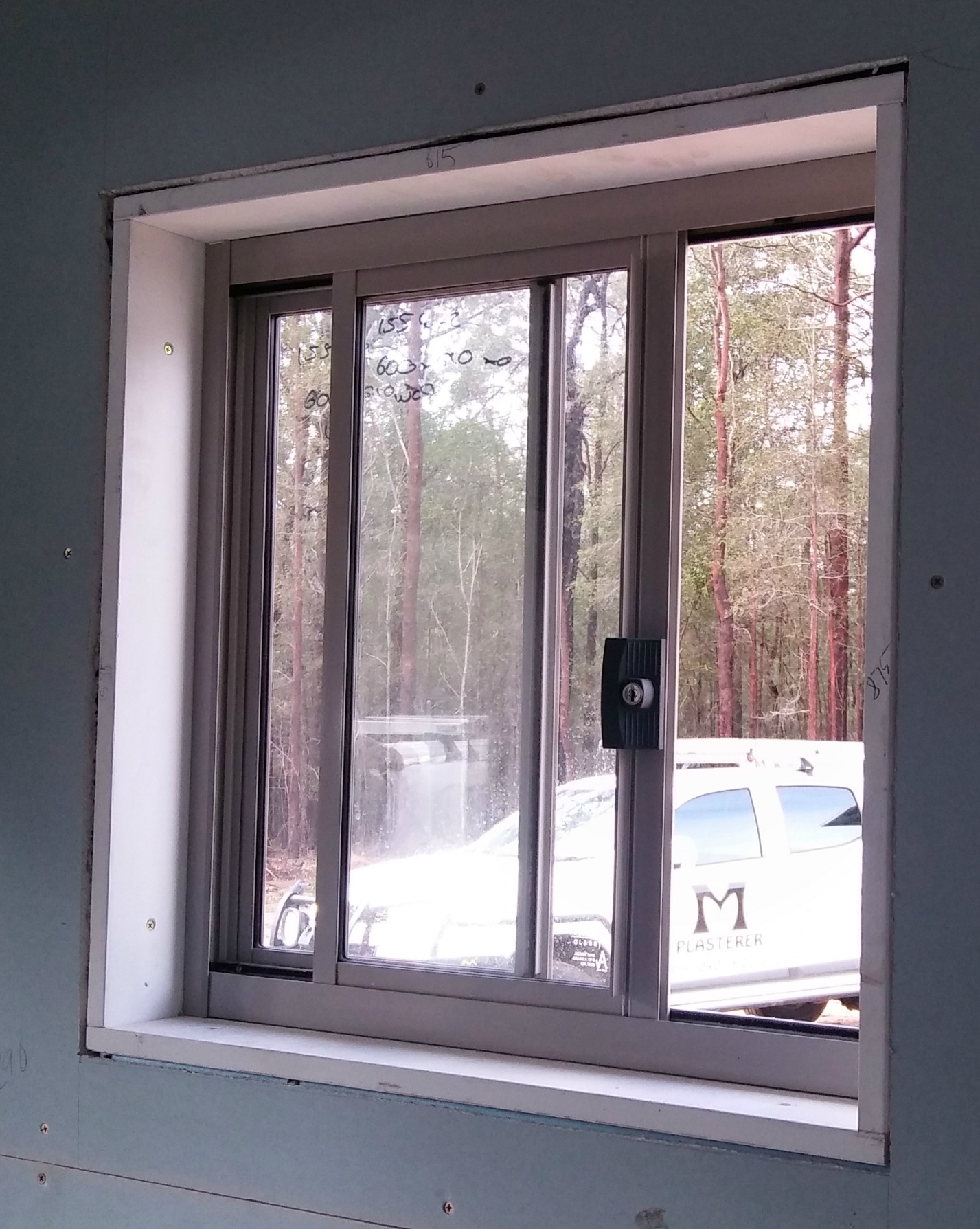 Has two or more sashes that overlap and slide horizontally within the frame (see cross section below).

Also called 'double hung', similar to horizontal sash but utilise spring balances and counterweights to aid in the vertical lifting.

An awning window is a casement window that is hung horizontally, hinged on top, so that it swings outward like an awning.

A hopper window is a bottom hung casement window that opens similar to a draw bridge typically opening to the outside.

A window above a door; in an exterior door the transom window is often fixed, in an interior door it can open either by hinges at top or bottom, or rotate on hinges.

Consists of parallel slats of glass or acrylic that open and close like a Venetian blind, usually using a crank or a lever.

A window set in a roof structure or high in a wall, used to harvest light for a room.

A flat or sloped window used for daylighting, built into a roof structure that is out of reach.

A sloped window used for daylighting, built into a roof structure that is within reach and can be opened with a rod.

A multi-panel window, used to create a protrusion from the wall line by using at least three panels set at different angles.

Is really a type of door, but one which has one or more panes of glass set into the whole length of the door, so it also functions as a window.

Consists of group of three windows with an arch over the center.

They are large fixed windows flanked by 2 casements or double-hung windows.

How to install house windows

Your specified kit house aluminium windows will arrive with a pre-installed reveal around the edge, which acts as surround to attach the window to the frame.They also have installed sashes/flashings on the outside edges and base.

Prefab kit frames have pre-made window enclosures ready for their installation. They are built 5-10mm larger all round, so wedges can be placed on both sides and beneath the reveal to level and plumb the window.

A great tip when installing windows for a house is to plane off a little from the outer edge of the reveal to aid in architraving, before installing. Have a number of wedges or packers, a hammer, long nails or screws and a good level ready.

Slide the window into the enclosure, pack out temporarily and clamp. Move it forwards or backwards until the reveal is 10 mm -the width of the linings (dry wall/gyprock), past the edge of the sill. Using a level, reduce or raise the packers until the window is level.

Try sliding the window sash to check it moves easily. Strike a nail through the reveals on each side near or through the packers, and check the levels again. Use the level on the window rather than the reveal.

When you are satisfied, nail the sides home. Don't put any nails in the top reveal to the lintel as it needs to be able to shrink if required. Now plumb the sides, repack and nail. Our sliding glass doors page shows a similar process with tips and tricks for the kit home builder.

There you have it, one of your house windows is installed. The kit will include flashing, either shaped galvanized iron or flexible membranes. These need to be installed onto the lintels above the window before the cladding is installed. You can also use sealants to reduce water entry and drafts.