How to lift a beam
when framing a ceiling

I needed to find out how to lift a beam, specifically a 250 kg - 7 metre long roof support beam. It needed to go up 2.5 metres onto the wall frames of my steel kit home to form part of the ceiling frame. I thought about how a builder might go about it when constructing a post and beam building, such as a crane which could easily raise the beam. But the cost would be a full day rate as it would need to travel from a town an hour away.

I thought about waiting for a delivery vehicle with an on-board crane, slipping the driver a carton, but there would be a lot of messing around getting it right so that wouldn't work. 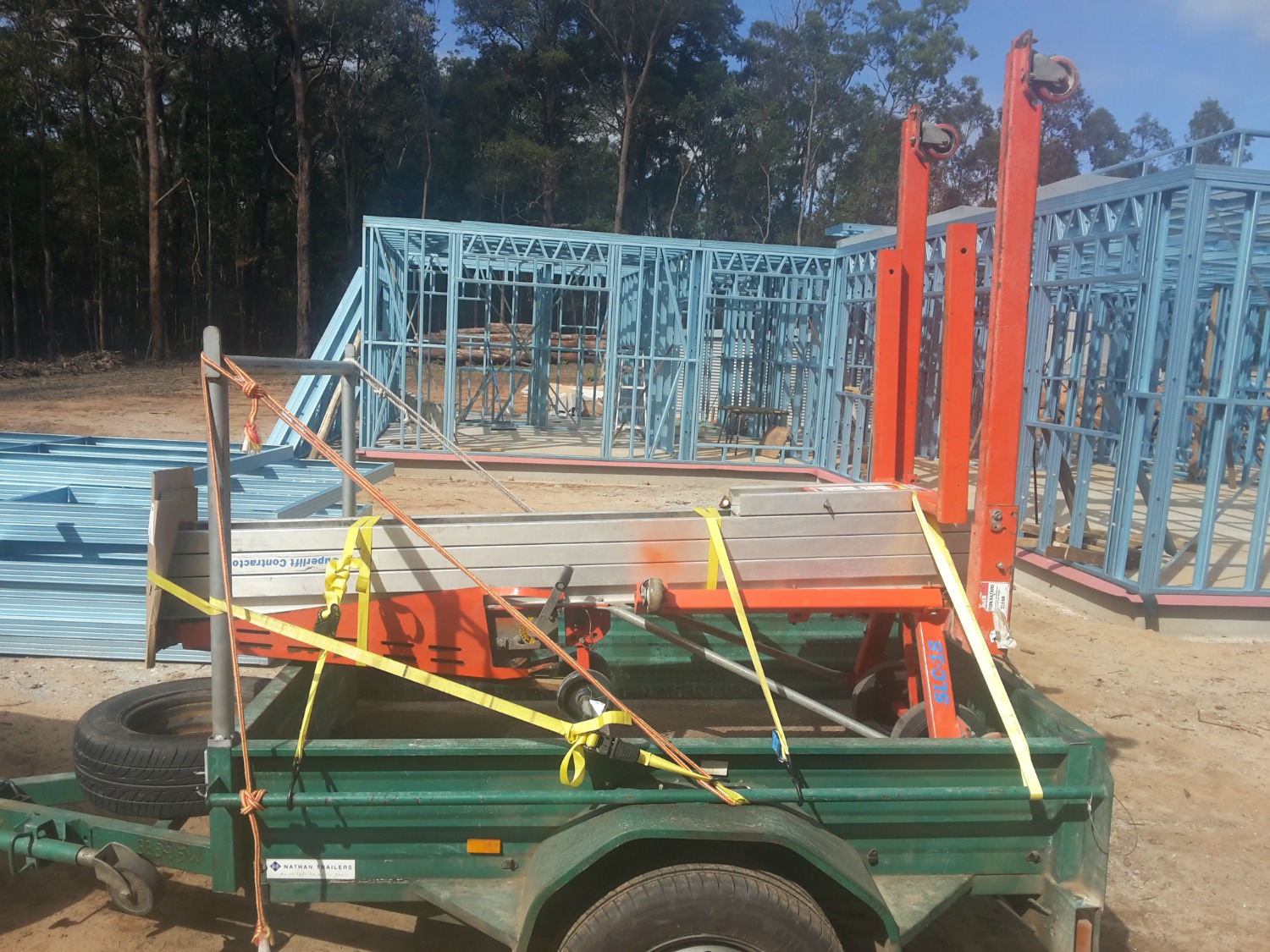 Genie hoist on a trailer

A quick web search for materials lift devices showed a gizmo called a Genie Super Hoist. I rang the local rental outlet and they said it could easily lift half a tonne, could raise it well over 3 metres and was basically a one person operation. Sold me. I took my 6x4 box trailer and picked it up. It was cleverly counter-weighted with strategic wheels that helped move it on and off a trailer and around a site. It fitted pretty well on the trailer with the top poking out the front.

I put the hoist in position near the beam, unsecured the lift mechanism, swung down the outrigger support wheels and lowered the mid wheels out of the way. I used my car jack to set the beam up 30 cm on blocks so the hoist could be wheeled in under it. I measured the beam to find its centre and pushed the genie super hoist in under. With any building or roofing materials lift, safety was important, so I added a number of wooden chocks and secured them with clamps to mount the beam solidly to the hoist. 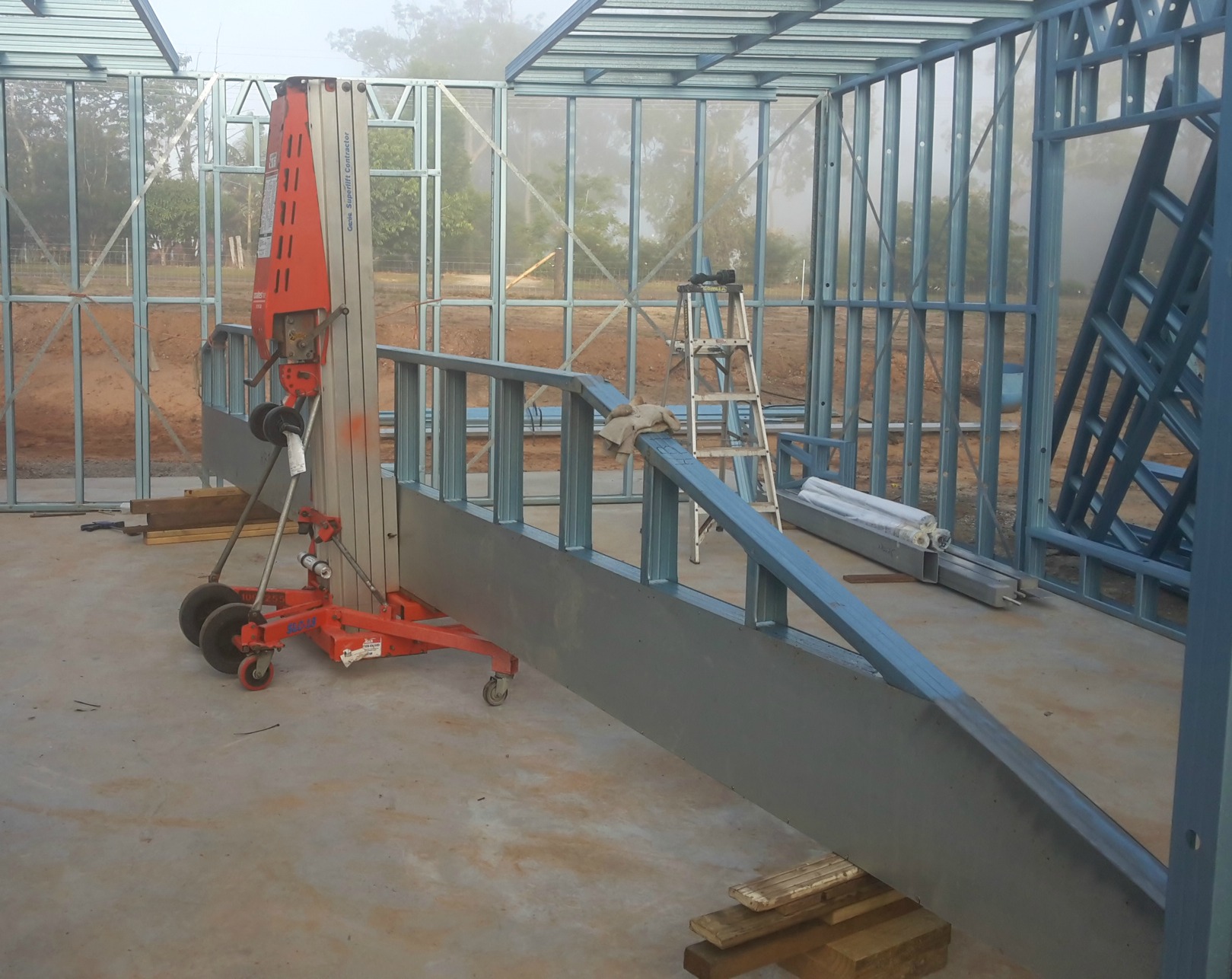 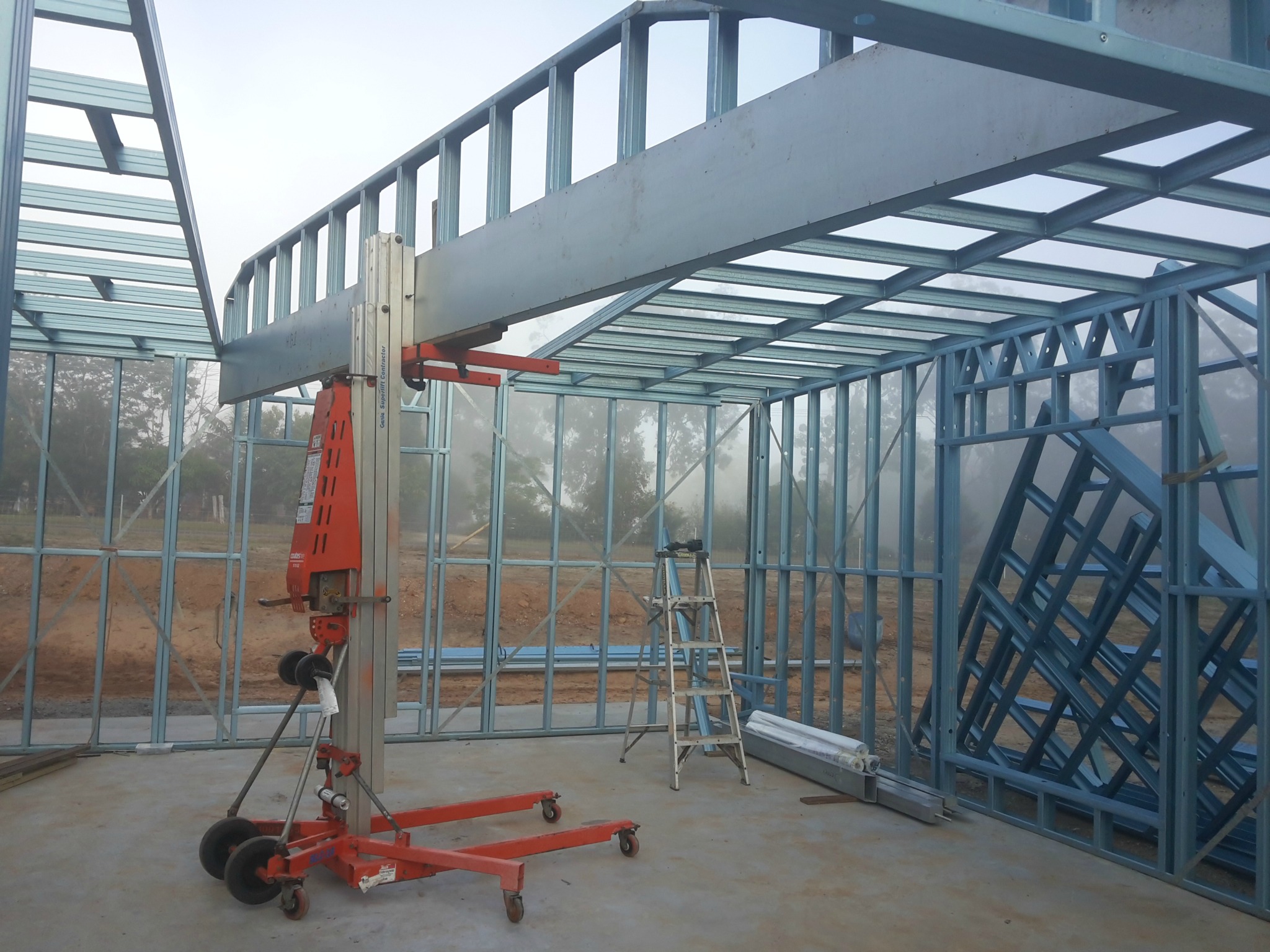 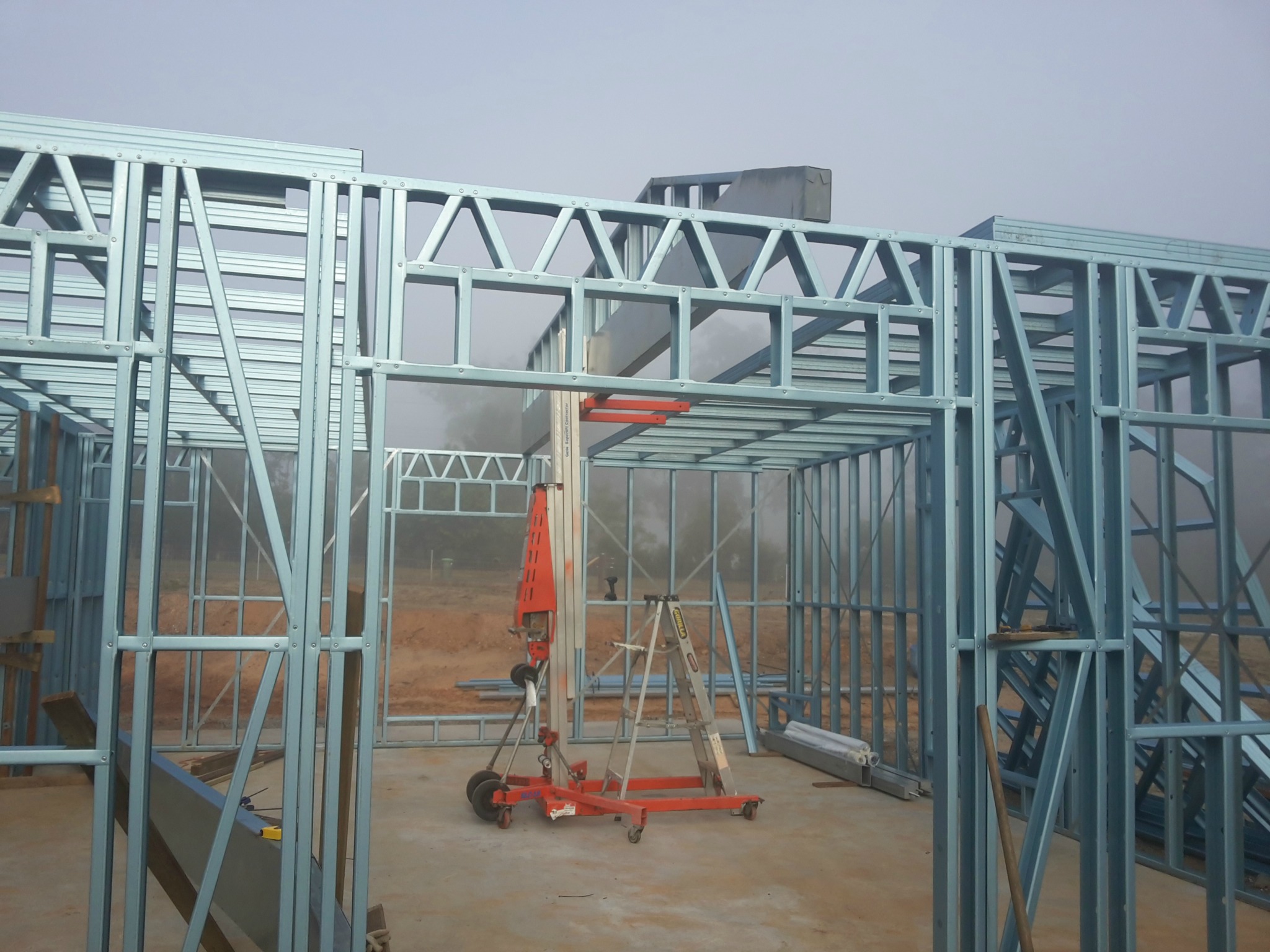 Ready to place on the walls

Winding the pulley slowly I raised the beam a metre high. I then rocked it a bit to make sure it was secure, and wheeled it to a better position. The hoist has 6 spinning castor wheels so it is very manouvrable, even when under load.

I continued spinning the pulley and raising it up to the level I needed it then slowly nudged the hoist around to where the beam-ends needed to be dropped on the wall frames.

I then reversed the winding and dropped it down onto the frames. So that's how to lift a beam: one person, two hours, job done. 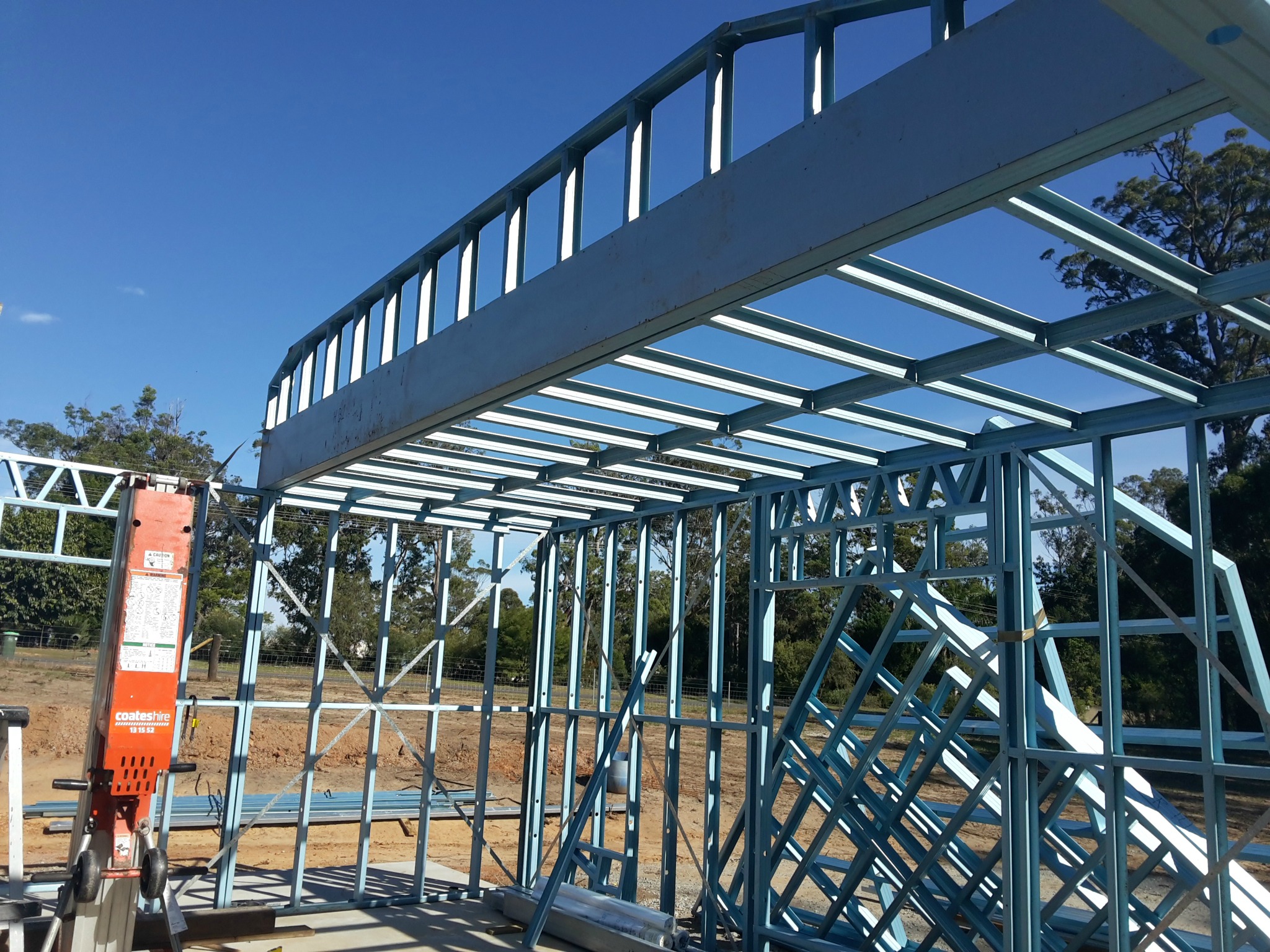 Return to framing a house or Kithomebasics