Land clearing to build
your own house kit

Land clearing on my 2.2 hectare (5 acres) of land had me in two minds, as the bushland was untouched until I came along. There were some immense tallowwood and blackbutt as well as two acres of semi-wetland at the back. I also had the thought that it was full of fuel if a fire came through and would create a mini fire storm in my back yard.

There was a lot of very tall thin gums which would fall on my house in the right wind. None of those had any shading capacity and also looked in poor shape, so they needed to go. My initial hope was to clear a couple of acres and leave the remainder to the birds, bees and kangaroos. I moved our plot a little south so some monster blackbutt, tallowwood, bloodwood and turpentine would be preserved.

Well my initial hope faded a little when the council was consulted. The first determining document was the Planning certificate which came with the sale. It was a 7 page, rather detailed document which had no less than 19 sections, which covered the many subjects including bush fire prone land, property vegetation plans and orders re trees. 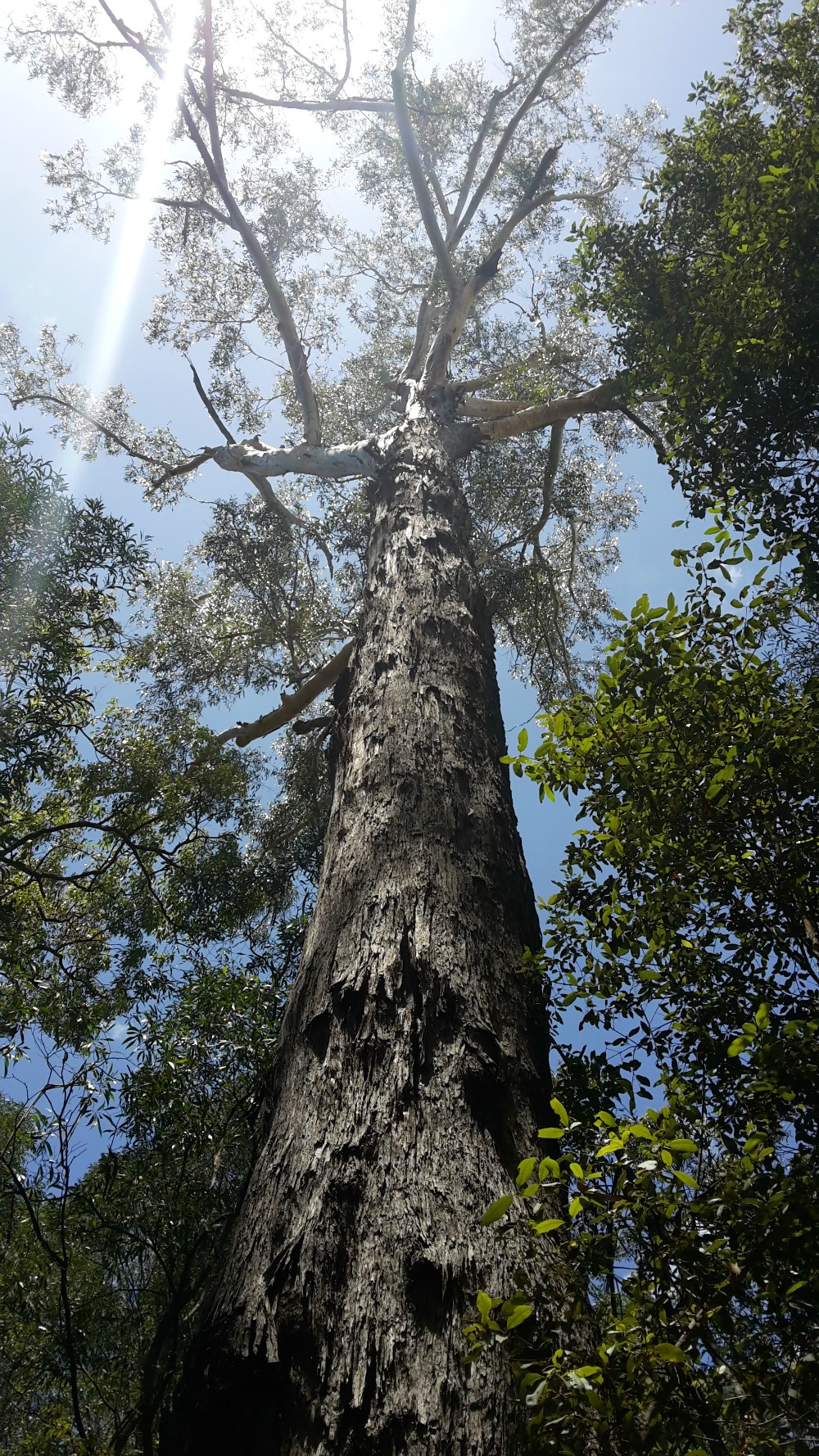 So my development application would have to comply with, firstly, that 'the land IS indicated on the Councils Bush Fire Prone land map’. Secondly, and in 'Other Advice', Part A alluded to a ‘Tree Preservation Order’, which seemed to be contrary to the Bushfire section, but I knew this type of order as it was in most council regions. It also stated 'the subject land is NOT known to include or comprise critical habitat as defined in the Threatened Species Conservation Act 1995'. Useful knowledge, but what about local plans?

On furthering our information gathering on the land I happened to talk to the Chief Ecologist from the local council. He asked if I knew that there was a Koala Plan associated with the area. I said I didn’t see it mentioned in the Planning Certificate, to which he exclaimed, ‘ah..due diligence’, and chuckled.

He explained that the plan had only just been adopted by council that week and that it restricted where I could place our house and what land clearing I could do. We invited him onto the property to plan our land clearing, which turned out to be a very good move. We showed him the trees we wanted to preserve, also a good move. He agreed, noted the fire dangers, agreed on an asset protection zone, and granted us about 0.6 hectare or 1.5 acres fully cleared. It was closer to the road, but a good compromise. 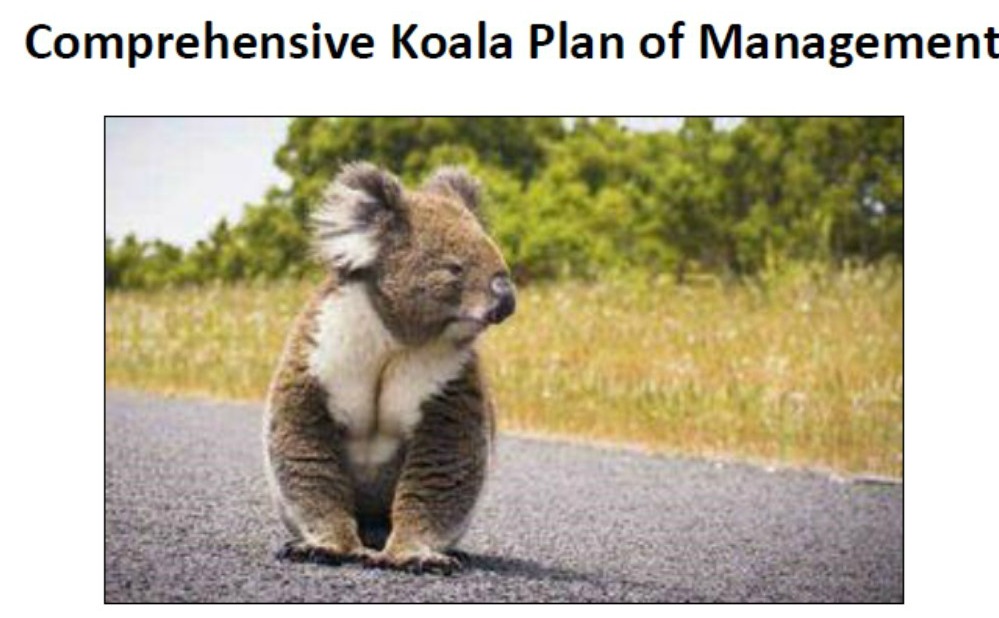 I needed to cost land clearing per acre and found land clearing services near me who quoted between $10k and $20k for 1.5 acres depending on how much I wanted done to it. I had early brush clearing done by a bobcat shredder to provide a fire break on each side of the property. This  land clearing machine moved through the brush, shredding scrub and trees up to 10cm (4ins) thick.

I also had this equipment push into the block to give access for the surveyor and the soil tester. This exercise was done before the development application was submitted so it was without council knowledge. I hoped they wouldn't mind some brush clearing, but to submit a DA I needed a soil test and a survey. So I got it done. Here is my Land Survey page. 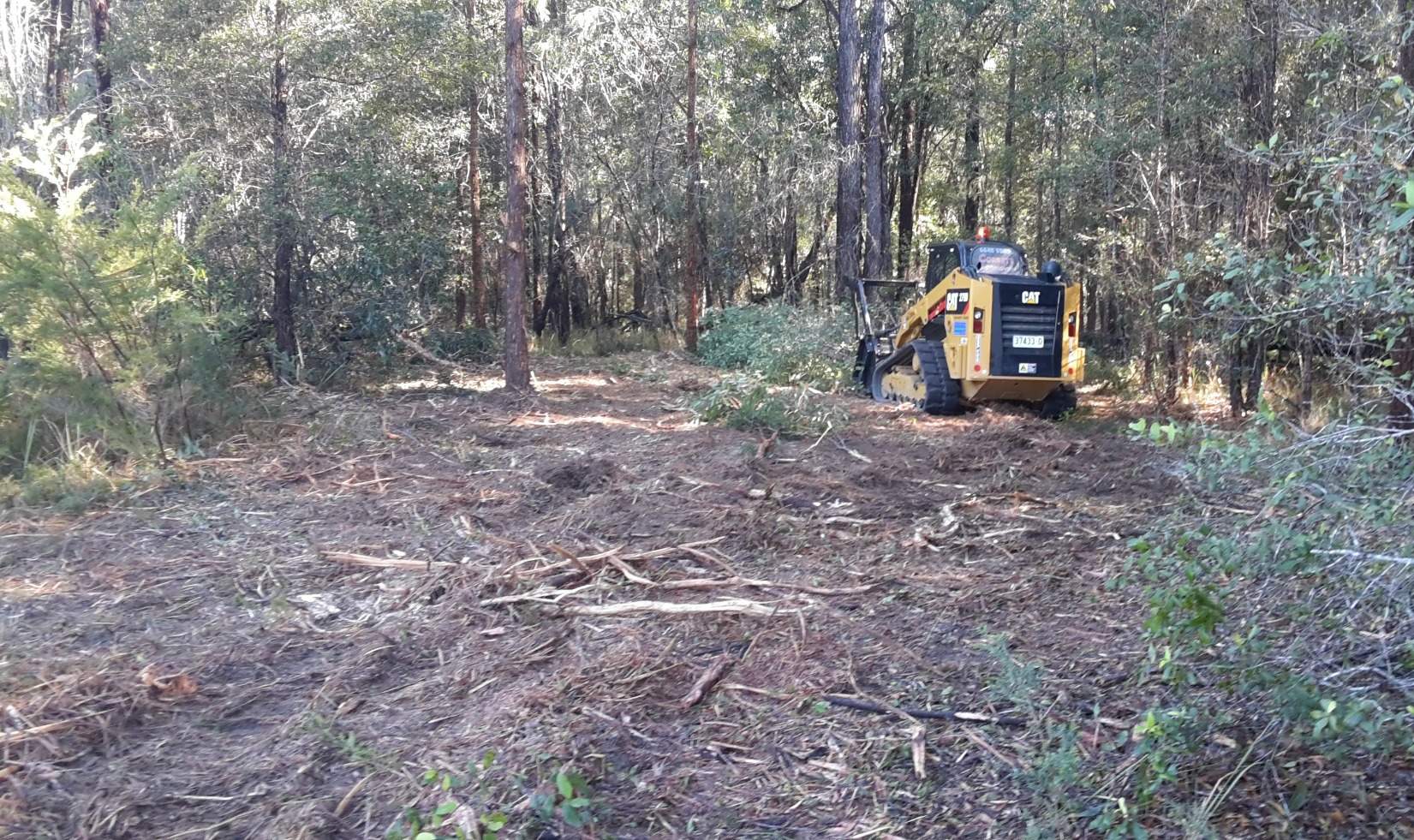 As well as the shredder, I needed to hire the best excavator for clearing land, which was a 20 tonne excavator with a huge bucket, a 'power grab' and a digging spike which made short work of everything that needed to be moved around the site. The spike was used to grub out the root system of the trees and then push them over. It also had a rake attachment to pull out surface roots and rocks. 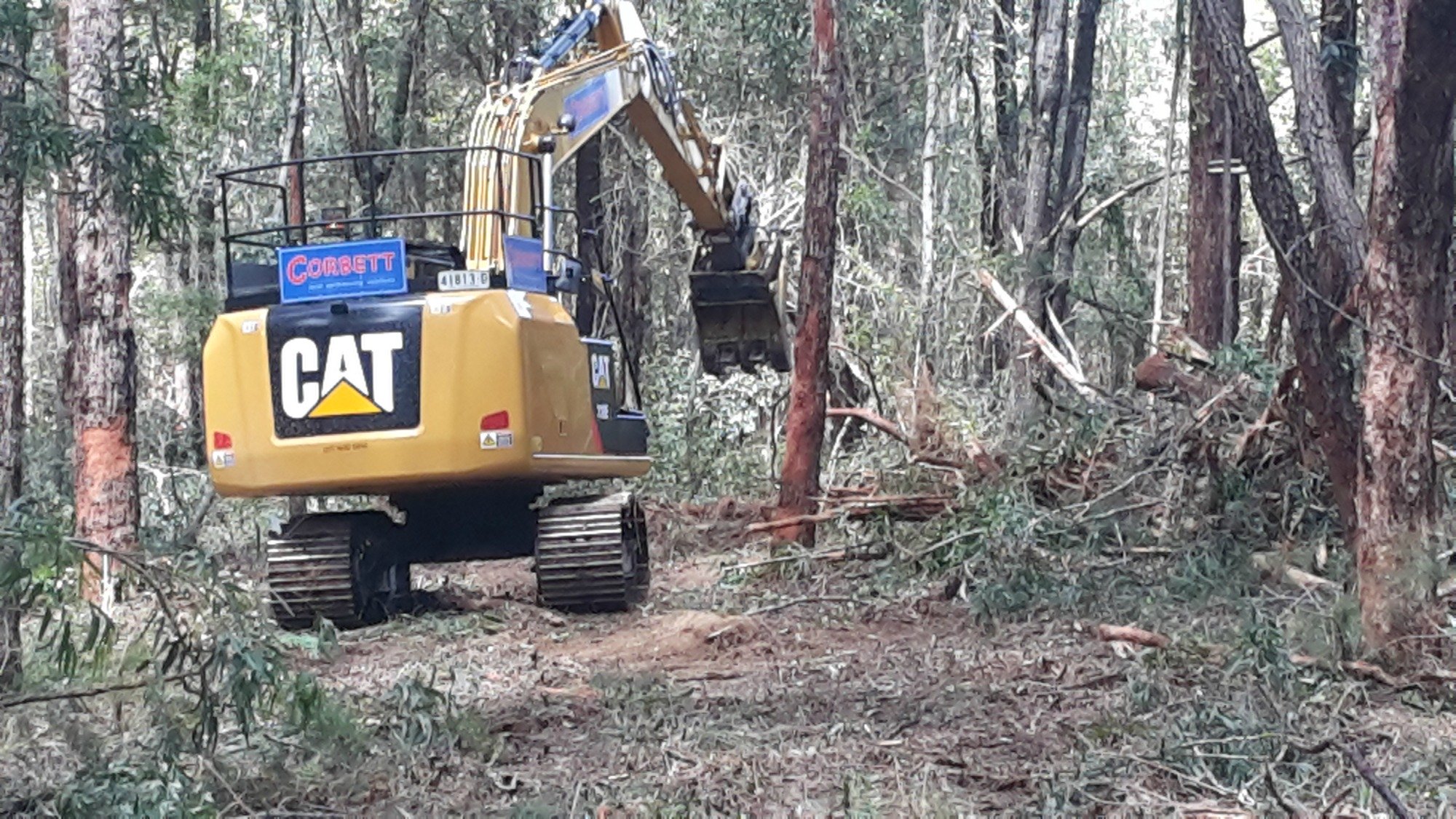 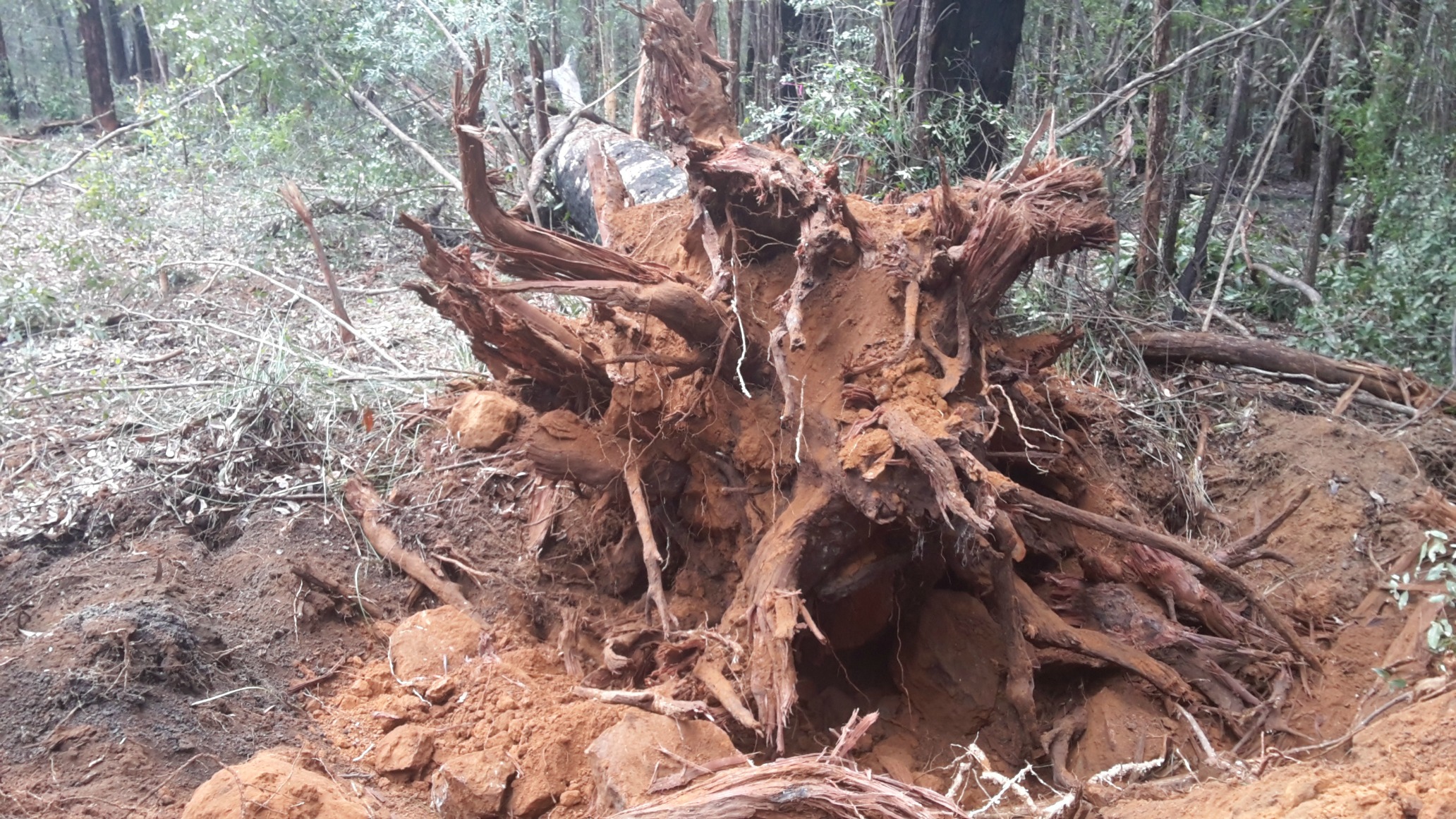 The power grab moved the trees and scrub to the burn pile. I hired a chainsaw worker to cut off the stumps and create poles to keep for fire wood and fence posts. It took about two full days to fully clear the area and create a burn pile with three feeder piles. 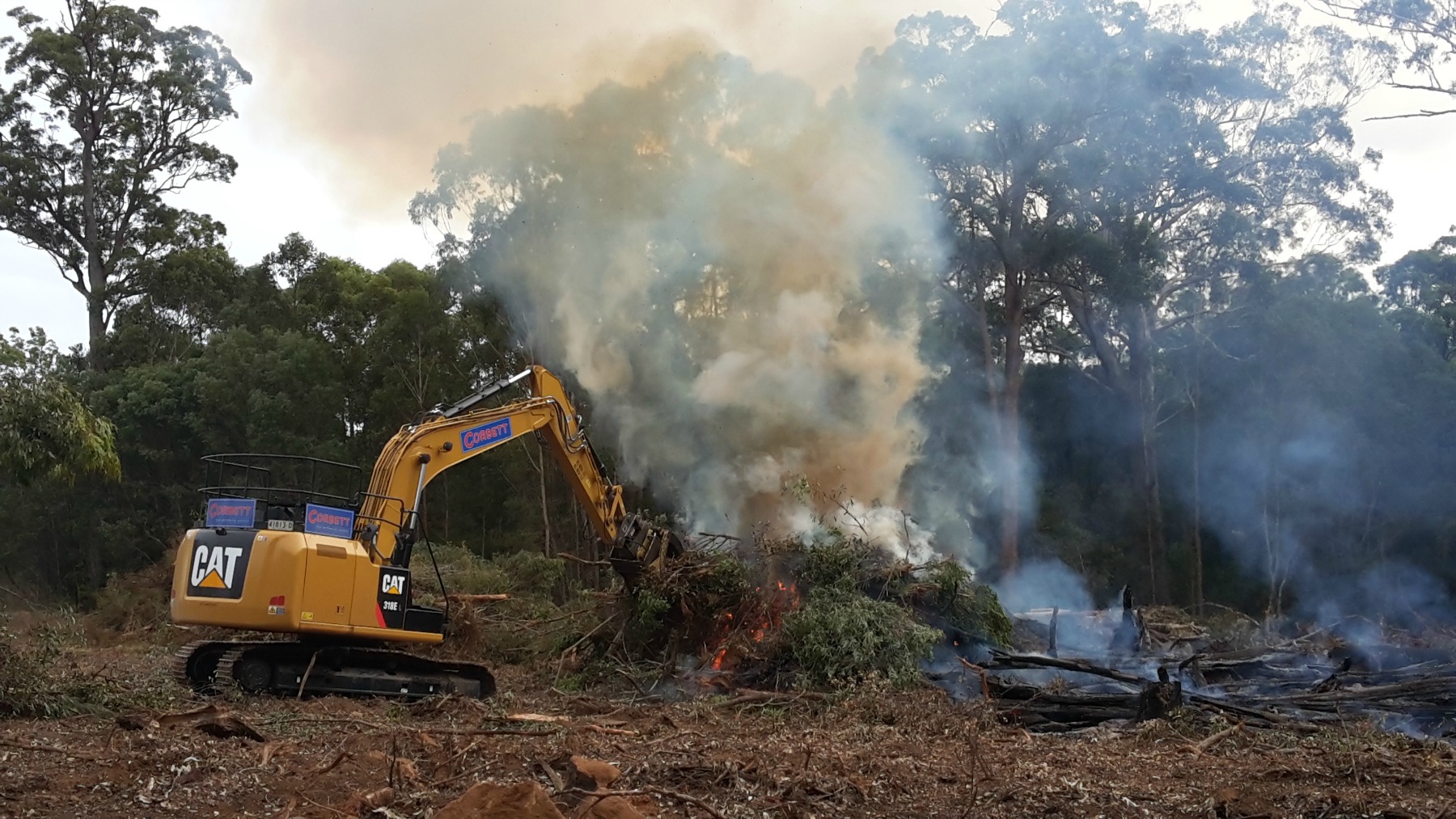 Adding to the pile burn 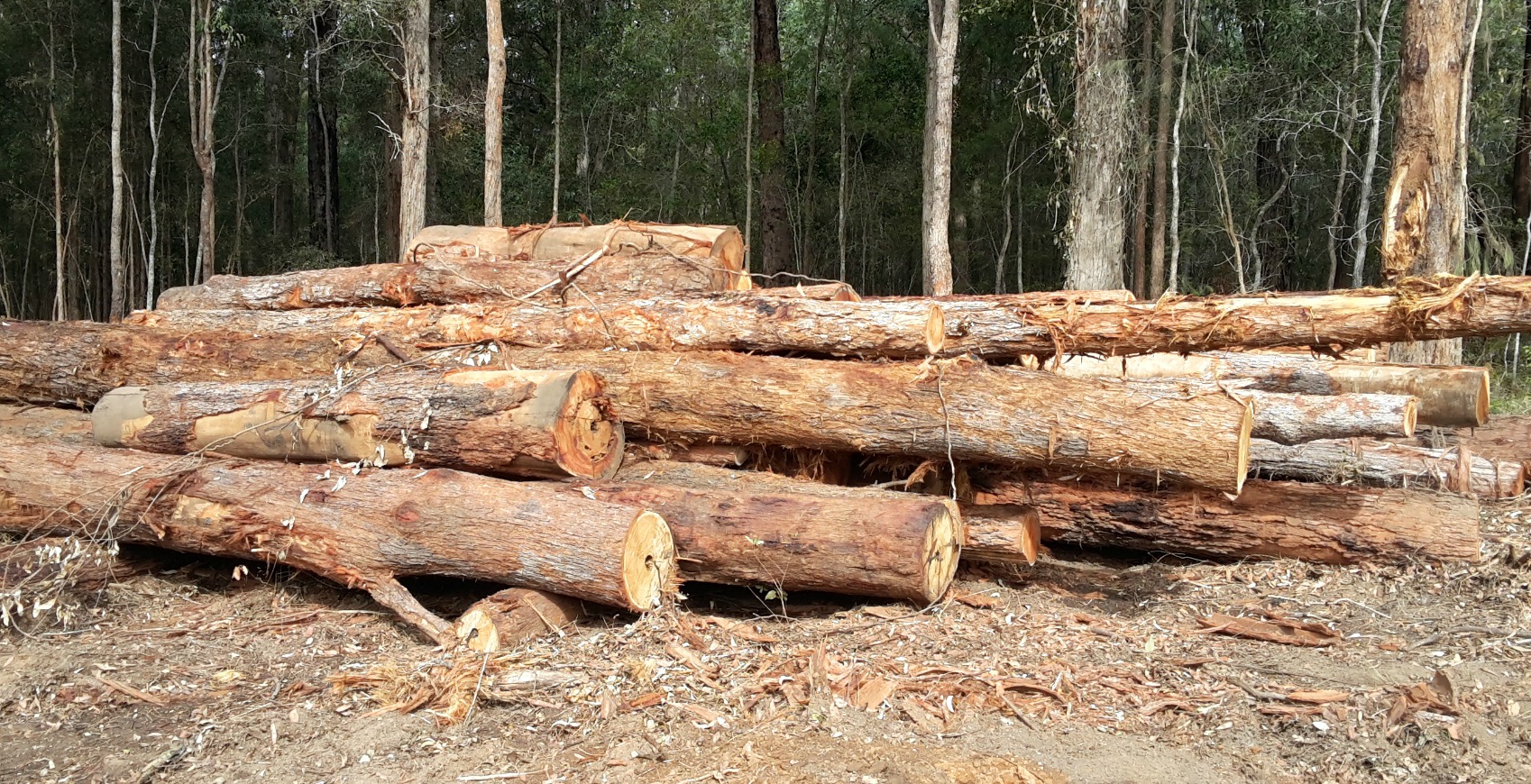 Other land clearing equipment was used to clean up including a stick raker, a power grapple, a level bar and a tilt hitch 4 in 1 bucket. I also had the bobcat use an auger to dig 4 x 1 metre deep holes to set my front fence posts. The excavator had a 1 metre bucket which it used to cut and fill the house site, build a rock retaining wall all of which was dug out of the cut, level a 10mx10m water tank pad and build a raised pad for my shed build.

Lastly, the excavator helped with the pile burn, adding from the feeder piles and stoking until it was consumed: about 48 hours. A fire permit was required from the local rural fire service. The cost of the complete land clearing works, including large trees, shredding, chain sawyering, pile burning, raking, pole stacking, rock retaining wall,  house site, auger work, raised shed pad, water tank pad, and machine float transport was about $16,000aud. So my land clearing cost per hour was about $200. The before and after land clearing site was unbelievable. From solid bush to safe home site with a 35 metre APZ.

Go to my Survey page or my Due Dilligence Checklist 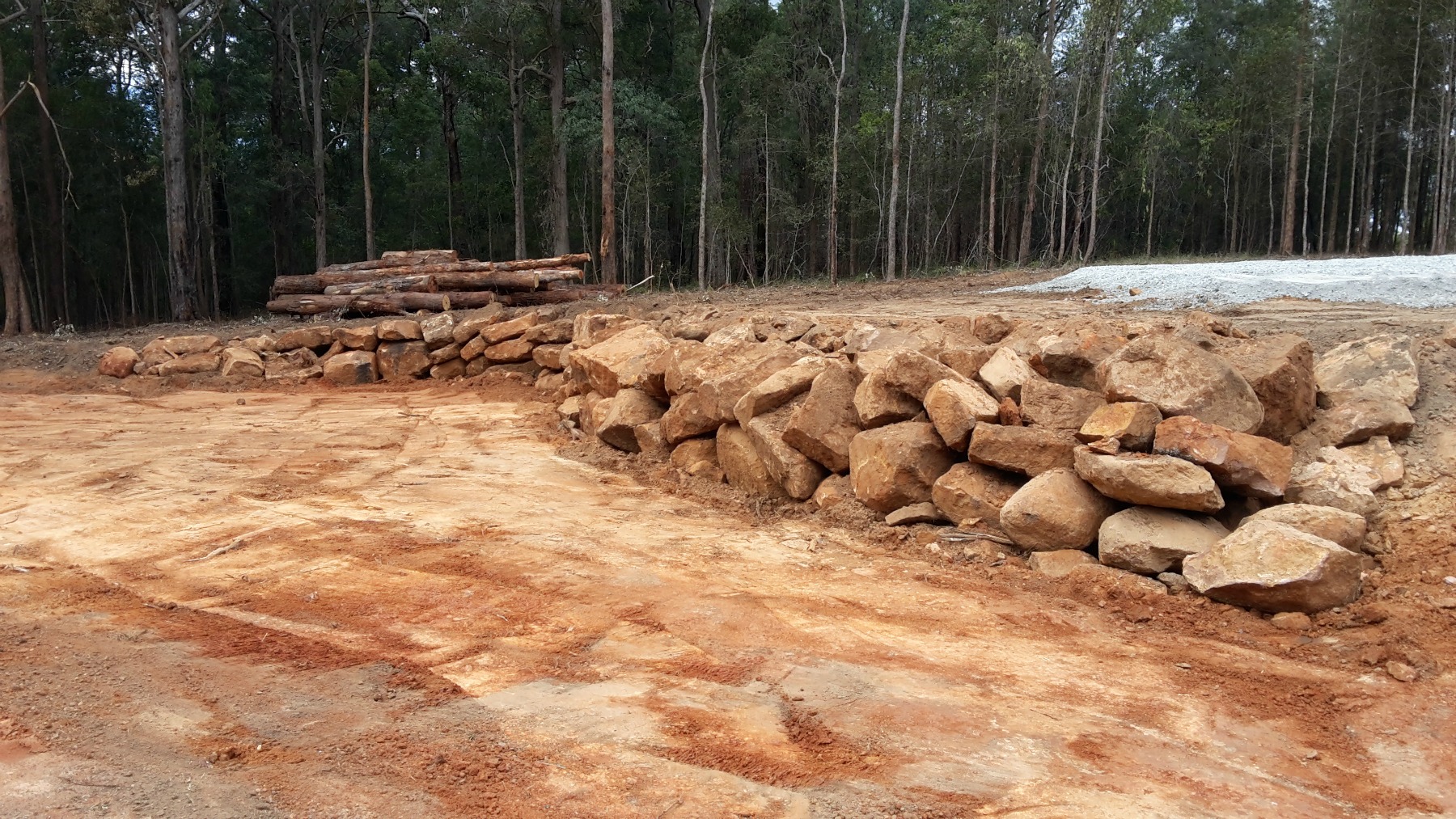 Rocks from the cut and fill went into the retaining wall