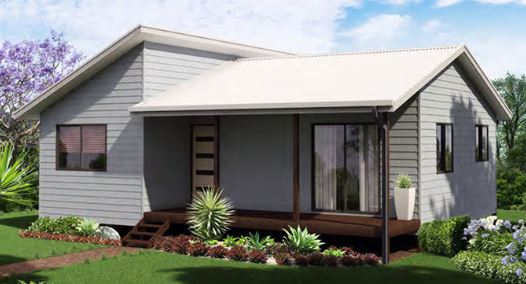 Craving simplicity? Then minimalist house design, with its clean lines and emphasis on form and function, might be for you.

With its roots in an artistic movement of the 1950s, minimalism has blossomed to encompass everything from high fashion in clothing to interior design and architecture.

Some people think of minimalism as a counterpoint to the notion that ‘bigger is better’, which is great news for people who are looking for small homes, kit house designs or other simple house plans. But just because the design is minimalist doesn’t mean that it’s boring. These types of houses absolutely shine.

So, you might ask, what’s great about this type of design? The clever use of space and storage options for small homes is a notable feature, as is the emphasis on open plan rooms, neutral colour tones and ambiance that oozes relaxation and style. These modern homes can also be easier to maintain, keep clean, heat and cool.

So, you might ask, what’s great about this type of design? The clever use of space and storage options for small homes is a notable feature, as is the emphasis on open plan rooms, neutral colour tones and ambiance that oozes relaxation and style. These modern homes can also be easier to maintain, keep clean, heat and cool.

So, what are the drawbacks? Well, if you consider being organised and reasonably tidy major challenges, or if you love to collect or hoard, then a minimalist kit house design probably shouldn’t be your first choice.

Your treasures that could be stored and displayed in traditional homes with their discrete spaces and multiple rooms will look like clutter in these sleek style homes.

How to start reducing

Jay Shafer calls it 'subtractive design'. Removing unusable parts from an oversized house-plan is a beginning. So what ever does not contribute to the function, does not directly assist the occupant, or does not enhance quality of life, is systematically eliminated. Minimalist house design states that extra bathrooms, bedrooms and space require extra money, time and energy from the occupant.

The following article is from http://www.marinij.com by PJ Bremier, IJ correspondent:

Think you can’t live in a tiny house? How about a small house?

That’s what Lloyd Kahn, publisher of Shelter Publications, known for its iconic Shelter and popular Tiny Homes books, challenges readers to consider when he discusses his new book “Small Homes: The Right Size” ($28.95) on May 7 at Book Passage in Corte Madera.

“Small Homes” is saturated with more than 1,000 color photographs of the interior, exterior and in some case, views of picturesque settings, of more than 65 small new build or remodeled homes from coast to coast in America and as far abroad as Turkey, New Zealand, Spain and Scotland.

Whether the home is conventional, tree house, farmhouse, lodge, straw bale, dome or yurt and whether it’s by a lake or in the mountains, in the middle of a desert or in the woods, each carefully designed home shows off its own mindful, most often handcrafted, style and personality.

Just as compelling are the accompanying labor-of-love stories told by their owners.

Many homeowners used repurposed materials, such as the Herberts who built on an island in British Columbia. They gathered stones from another island, scoured nearby beaches for washed up logs and milled lumber from their own building site. Its craftsmanship makes it one of Kahn’s favorite homes in the book.

Kahn’s own 2,000-square foot Bolinas home, set on a half-acre of flat land that supports his production studio, two greenhouses and a mostly edible garden, is also constructed of used materials, including wood from Treasure Island’s old Navy barracks and windows from former chicken coops in Petaluma.

Saving money, he says, is a driving force to building or remodeling a smaller home.

Finding buildable land around desirable metropolitan areas such as the San Francisco Bay Area, like he did in the 1970s, “is just about impossible now,” he says. “You’d have to look two to three hours away from those areas.”

These days, he says, “it makes more sense to find a little rundown house in a town or city that just got rid of crack dealers and crime and fix it up,” he says. “That’s what I would do if I were a young person.”

The Robinson family did something similar a few years ago. As they write in the book, they found a vacant, bank-owned, rundown home overlooking downtown Los Angeles and fixed it up. The home is still a work in progress but the owner says that “neither living totally outside civilization or in a beehive apartment” appealed to him.

The concept for “Small Homes” emerged after Kahn concluded that tiny homes weren’t practical for most couples or families. Small homes, however, were and offered the same advantages. They are less expensive and quicker to build or remodel, heat, cool and maintain than the average-sized home, and tend to attract people who can’t afford to pay $4,000 a month or so in rent or don’t want to get tied up with a mortgage the rest of their lives..

A simple home is the most effective labor-saving device there is.  Here are some storage tips for your small spaces.

You can go to Small Kitchen Design

or go back to House floor plans

or go to kithomebasics homepage