The shower floor in my new steel kit home began with the slab builder screeding a slight slope towards the centre of the room to assist overflow catchment. Now this didn't help the shower setup at all as my idea was to build a large walk in shower, at least half the size of the bathroom. In fact I now call it my shower room, as there is no bath, just a big shower, so some clever hobbing was required.

My shower floor design was for a 1400 x 1400mm square in the corner of the room with a hobbed surround to support the frameless glass. It would require the following tasks: 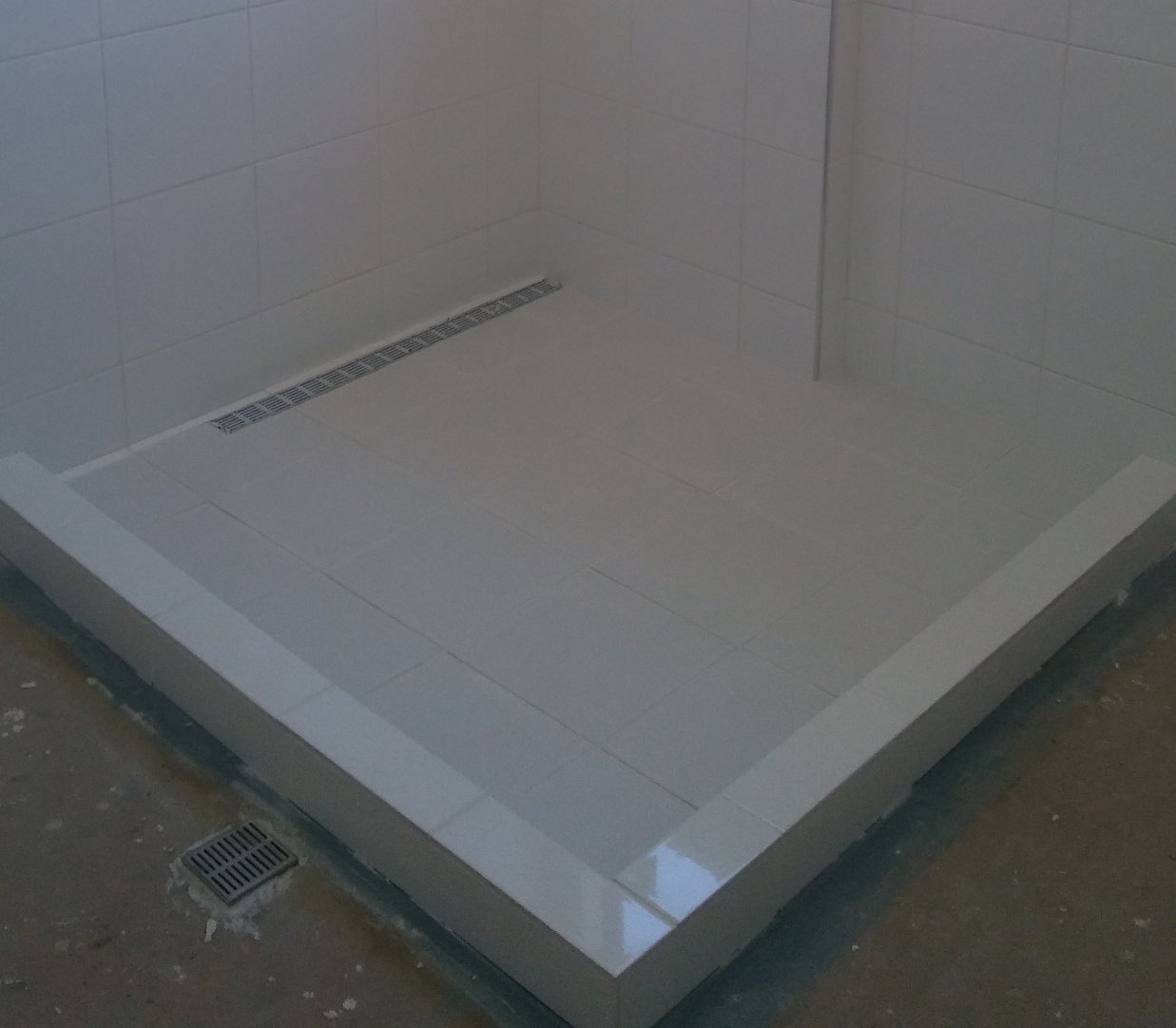 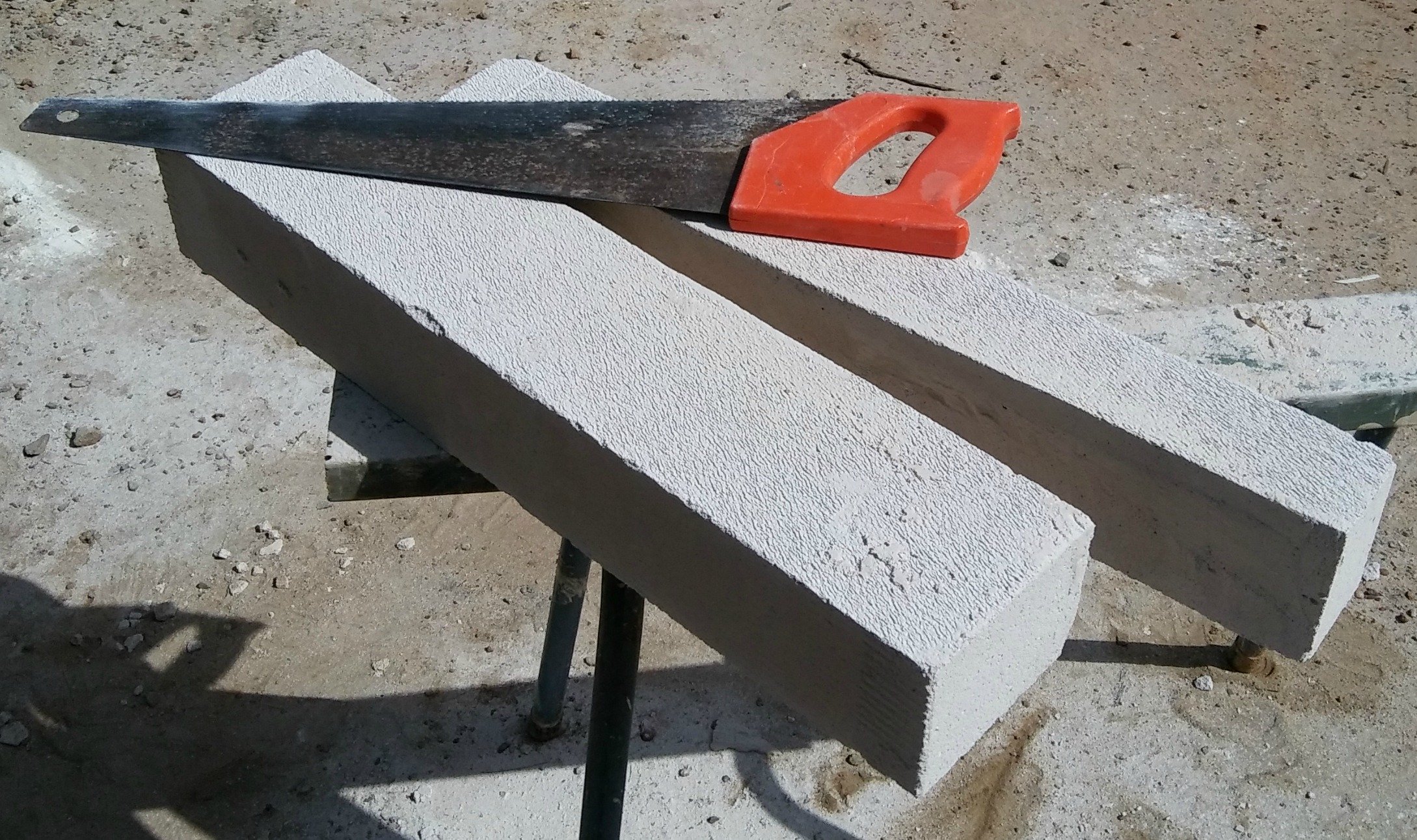 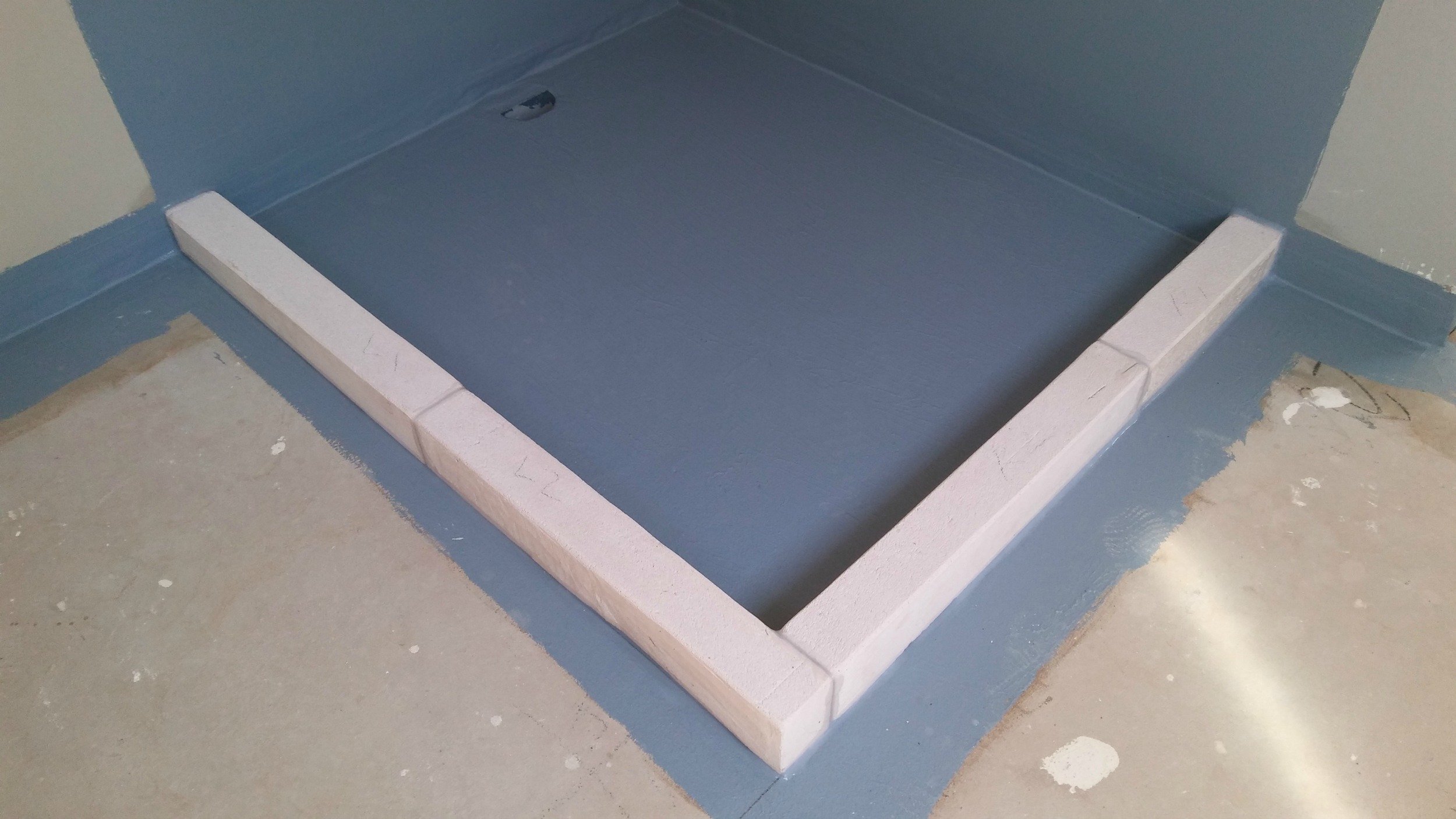 My shower design required a hob to be fashioned and hebel block (aerated concrete) was my preferred option. I had never used it before and was happy to give it a go before the water-proofer arrived, so I bought 7 blocks, each 600mm x 300mm x 100mm at about $7 each, watched a couple more youtubes, and set to work. I needed my hob to be a total of 100mm wide, so a 100mm tile could be laid on top with two vertical tiles under it. That meant the hebel had to be about 75mm wide to start with.

Well, I didn’t enjoy my first few cuts, which resulted in broken blocks. They were brittle and required a few different tools to get them to split correctly. Using a hand saw works to a point, but the saw wanders a bit and the cut ends badly. I ended up using my grinder with a concrete disc and made a channel around the block and finished the cut with the saw. I made sure I didn’t force the cut as this ends badly as well. Once I had made that 75mm cut I laid them out and got them trimmed and square.  I then had to trim off the bases to make them level, as my floor had a fall. I was then ready to seal the shower. 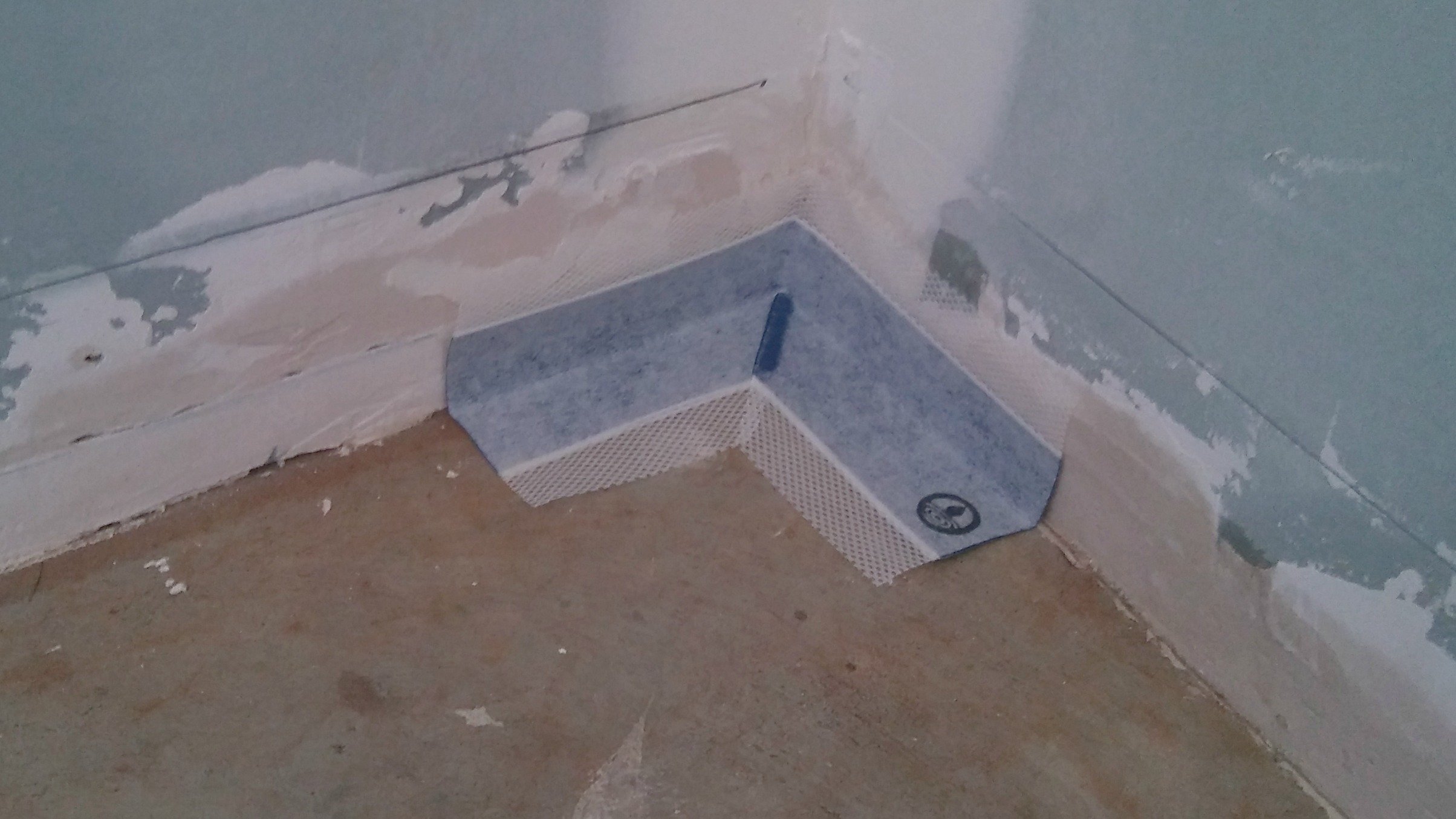 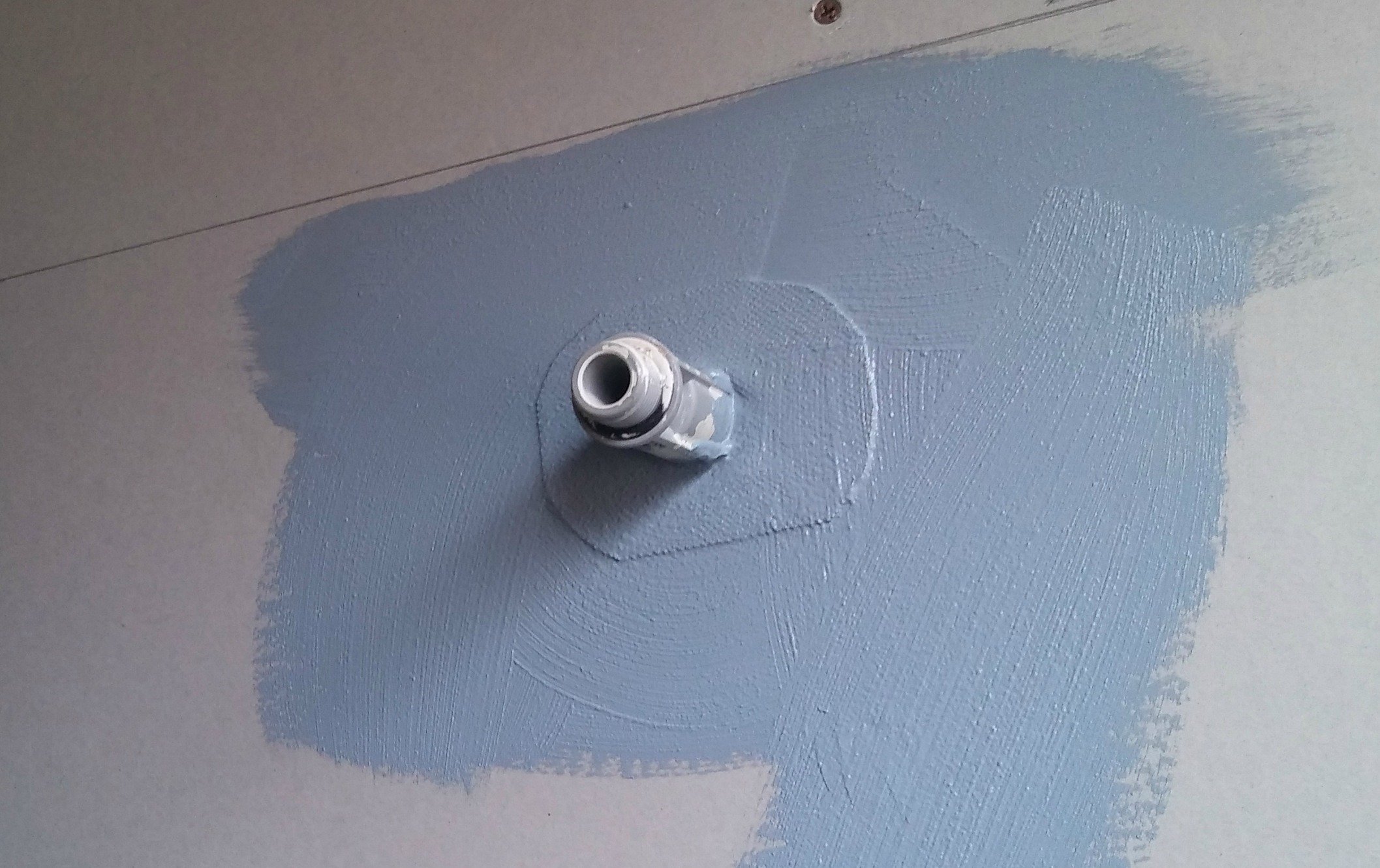 As it was a new house construction I needed a waterproofing contractor to do the waterproofing and supply a certificate. Step one was to apply sealer prep onto the concrete. Waterproofing products are noxious stuff so the windows were open and a fan was on full blast. Step two was to add corner pockets made from a product called Emer-proof as well as adhesive surrounds for the drain. Step three was to apply the first coat of water-proofing to the wall/floor edges and corners. This product: Ardex Rapid, was water based and had less odour, but we still had the fan going to dry it quickly. Step four was a full coat on the floor and walls.

Next job was to glue down the pre-cut hebel hob blocks with silicon and then a couple of waterproofing coats on them to finish off the wet-sealing.

The last step was to lay a screed of sand and cement inside the hob to produce a shower fall slope of 1 in 6, and was easier than I thought it would be. I used a piece of wood to mimic the strip shower drain so it wouldn’t get damaged.

I marked my screed level around the inside of the hob and shower wall, and keeping the mix relatively dry, I floated with a level both ways to keep it straight. 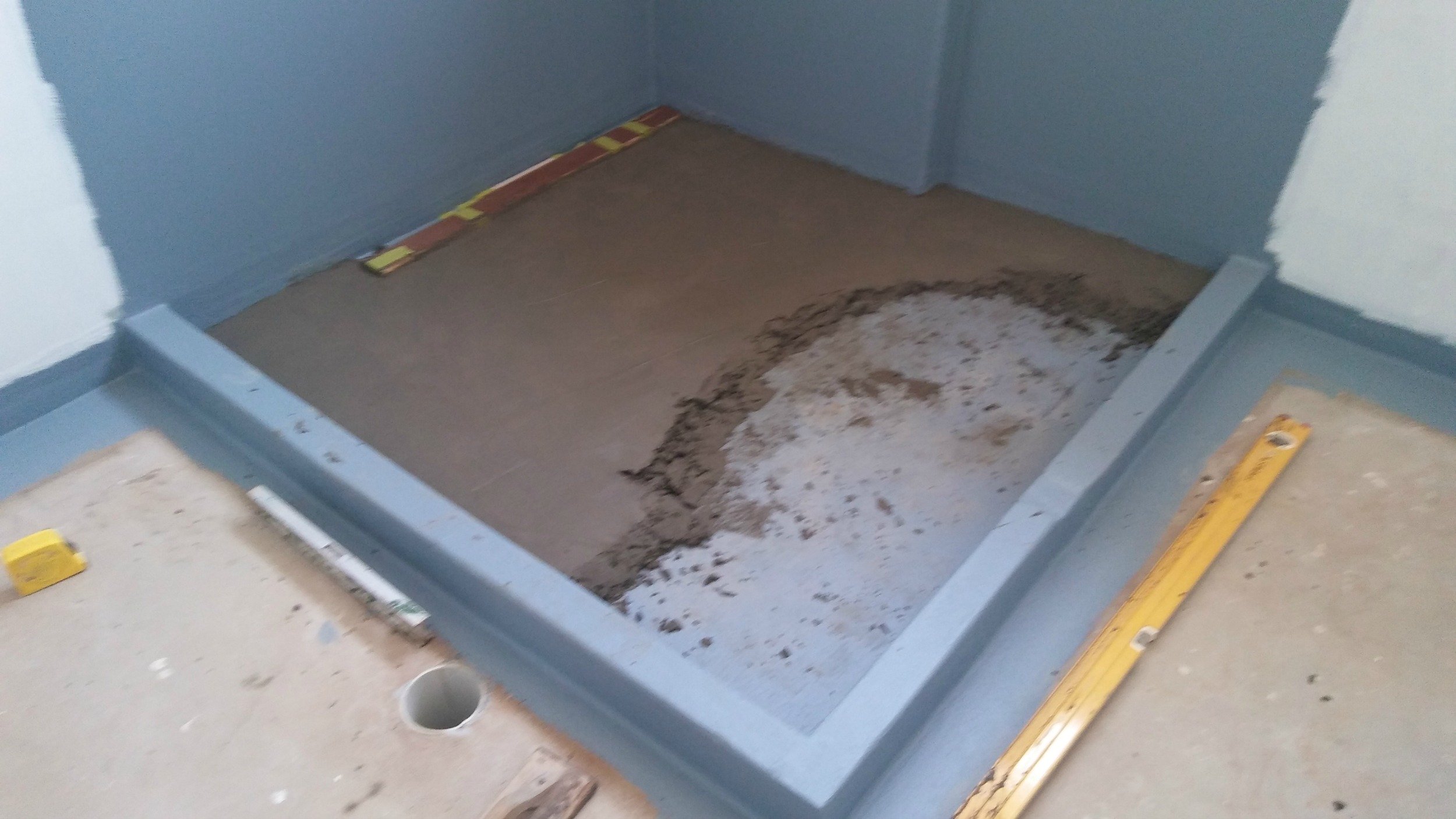 Go now to Building a Walk in Shower

Return to tiling a shower

or return to kithomebasics home page